Gentle Friends I hope you all had a super New Years Eve and a wonderful New Years Day.  We stayed in as I am not one for the massive crowds and crazies driving around NYE.... and I brought in the new year ironing some of the things I had washed earlier in the day.  I hate putting things away not ironed.  Then yesterday we went to an friends house fro their annual"good luck" luncheon the have been hosting for the past few years - he makes black eye peas with ham hocks, collard greens, corn bread and four types of salsa, from hot to melt the spoon which has habanero peppers in it - I stay away from that one and stick to just the hot, which is pretty hot to my little tongue!!  He makes a ton of food and everyone goes home with a doggie bag and we'll be having it again tonight - I'll make some rice and a cornbread and it will be delicious!!!
________________

The Saturday before Christmas I ran around to my usual thrifty haunts and found a few things, we also hit up a great Estate Sale........ 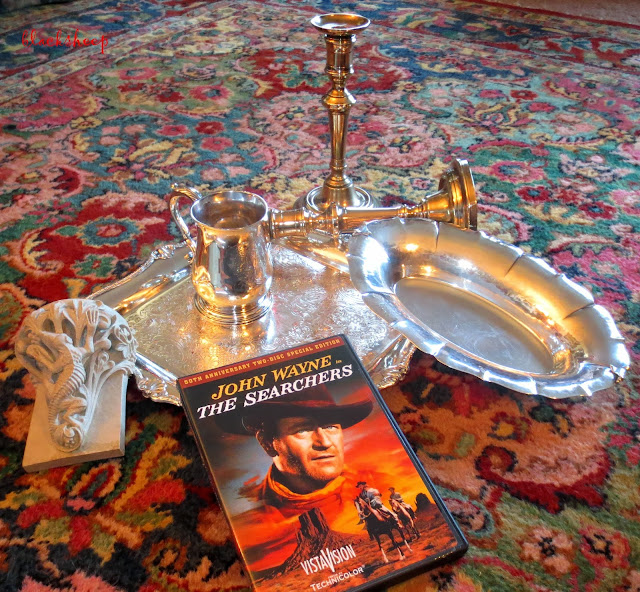 .... I found the flaring dish (on the right) at a Goodwill.  It is Italian and marked Fierenze and 800, the standard Italian silver mark, and was only a few dollars.  It is beautifully made and I can only think that no one had a clue as to what it was - I was totally stoked!!  The other things I picked up at the Estate Sale.  On Saturday I only bought the DVD, English silver tray and the salamander corbel,  I saw the brass candlesticks and the sterling mug (cann), but they were just too expensive for me........  The corbel is a reproduction from Wells Cathedral, I have a few of these repro bits from other cathedrals I have visited, they are made from the ground up stone from the actual places broken off and left over during restoration.

Of course I obsessed the rest of the day over the mug and then after 8 am Mass the next morning and our weekly visit to Trader Joe's, I drove back across the city to see if there was anything left to be gotten.

Usually on Sunday, estate sales will cut the prices in half to move what didn't move the first two days.  I was also hoping that the mug had been sold, so I wouldn't have to decide it was just to much money.......  I walked in the house and there in the front room in one of the cases with the few other things that were pricey sat the mug....  I sort of circled it some more - then walked out and into the dinning room, found that the brass sticks were still there and half price, so I had to get them now.  I turned around and walked back to the case to fondle what was quickly becoming "my" wonderful, mid 18th century piece of silver!!

The more expensive things I was told did not go half price (I had figured they wouldn't) and they were slated to go to auction if they didn't sell.   There was some glass stuff and few other pieces of less interesting silver some pretty jewelry... and "my mug."  I haggled a bit and got $50 knocked off the price and finally decided I needed a Christmas present to myself, so my crazy silver fetish won out and it came home to live at my house for a while.  I really don't know any of it's provenance, the marks tell me it was made in London in 1752 and now it resides in San Francisco, but between then and now who knows???  Here's a shot of the great engraving on the front.... 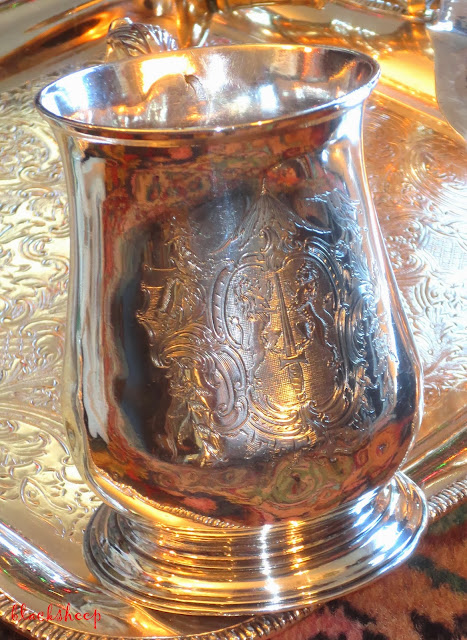 There you go sports fans - thanks for stopping by, dos top again!!