A Great Weekend of Fun Stuff

Gentle Readers and Dear Friends it was a lovely weekend here San Francisco - the weather was great low 70's bright and sunny - we got lots cleaned around the house and a bunch of errands run!!
__________
We started the weekend off Friday evening going out for Sushi to Kitaro in the Richmond.  I have mentioned this place before so I didn't bother to take any snaps.
__________
Then on Saturday evening we had a special treat!!  You remember the kitties we watched a while back - their mommy and daddy wanted to take us out to dinner as a Thank You - how great was that!!!  We went to a San Francisco institution called "The House of Prime Rib."  I had never been here so I was really excited to go, as I had heard some super things about this place. 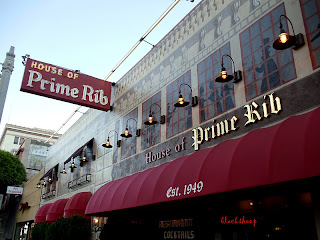 Reservations are terribly hard to get but Tom got us one and so our evening was secured!!  The menu is very small as they do one thing and do it superbly!!  They make prime rib!   You start of with a super salad that they dress at table side... 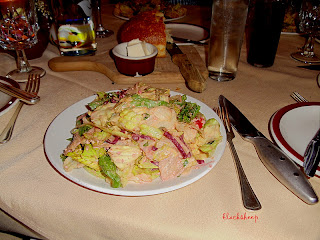 They use a special creamy house dressing - Then for dinner you decide which cut you would like of prime rib...  from a small, City Cut (which ain't so small) to a King Henry VIII Cut ( a monster piece of prime rib!). Then you have to decide what sides, mashed or baked potato, and either creamed spinach or creamed corn and there you go.  I had the City Cut... really rare, and going MOOOOO - 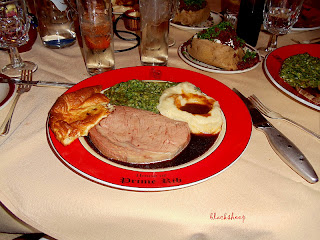 with mashed and spinach - absolutely delicious!!!!
The other three went for the English Cut with baked potato and spinach.. 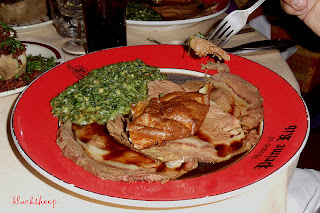 the potatoes where just heaped with toppings..... 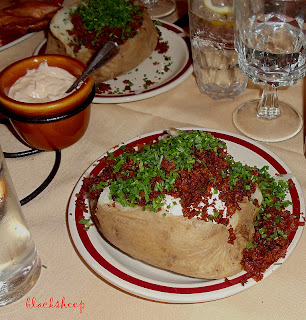 Also with each dinner was a piece of Yorkshire pudding - and the sourdough and corn sticks kept coming - lets just say they filled you up with some super delicious food!!!!  The HoPR also has deserts but by the time that came around nobody could look at another bit of food.  In fact I took home a piece of mine a some of Rico's for the who-hounds and they loved their bites of prime rib!!!!  It was super evening, great food and some super friends!!!!!! Thanks Tom and Mindy!!!!!!
__________
Yesterday after Mass we stopped off for some breakfast and a quick visit to Trader Joe's and then it was home.  I spent the rest of the day watching films, stitching some and baking some.
I stitched some on my "ABC Noel" piece and am now at the half way point on the letter "M."  Here is a pretty bad snap of how it looks at the moment - 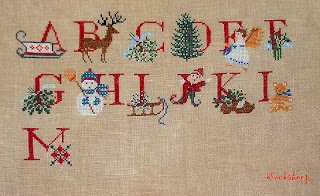 The only major change I have made - aside from a small miscount - that I am leaving - is the Teddy Bear at "L" - it is charted as white, but after a few rows I did not like that so I frogged them out and switched to the golden brown colour I like much better!!
- and - in the kitchen I whipped up some enchiladas and I baked up this great Fall Apple cake. 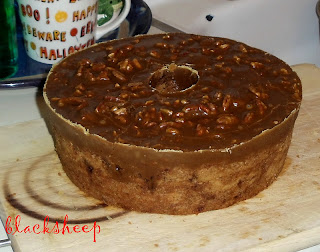 the recipe I found over at Amish Stories - click HERE to go there.  The recipe can be found on this Blog Posting.  The only changes I made to the recipe was to add some spices (if you would like my additions just ask)  - the recipe called for none and I thought it would help the cake immensely - and I was not wrong. 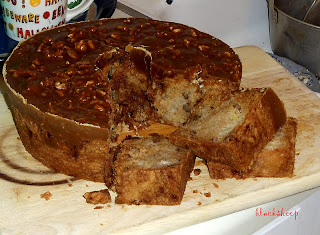 It turned out to be a delicious moist cake the brown sugar topping is just perfect!! It has great apple chunks and flavour, just perfect for the Fall!!!  Thanks so much Richard for the BLOG and for the great reading!!!
__________
There you go sports fans.  I'm gonna talk movies tomorrow so get ready!!
Thanks for stopping by do come again.
Take care,
edgar
Posted by Edgar at 7:14 AM