Gentle Readers and Dear Friends thanks so much for your kind comments about yesterdays post.  It was a fun foodie weekend for sure!!
__________
I had today's post mulling over in the back of my mind for a week or so but just never got to getting it written and posted.  Now with Hallowe'en over and today being the 1st of November - that seems incredible!!  I better get to mentioning these films - and although worth seeing anytime of the year they lend themselves to the Fall and Hallowe'en especially.
First up will be a film from my childhood - that I have seen many times over the years and always enjoy!!  "Mad Monster Party" - 1967 - starring the voices of Boris Karloff, Allen Swift, Gale Garnett and Phyllis Diller. 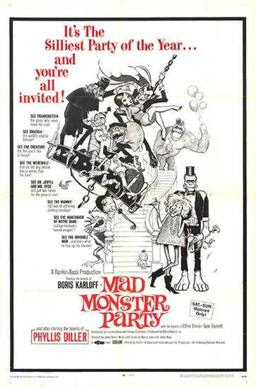 Set on the Isle of Evil the Baron von Frankenstein, Karloff, as head of The Worldwide Organization of Monsters invites all the classic monsters to his retirement party - they include Dracula, the Wolfman, the Invisible Man, the Mummy, Dr Jekyll & Mr Hyde, King Kong and Igor, inspired by Peter Lorre.  This retirement involves the Baron turning over his fantastic inventions and "secrets' to his nerdy nephew Felix.  The Baron's outrageously gorgeous secretary/assistant is outraged and plans to foil this giving away of the secrets to the nephew.  Although not really a Hallowe'en film it always played during the Holiday as I was growing up so I always think of it as a Hallowe'en film.
__________
The next two films are much more recent - "Hocus Pocus" - 1993 - starring Bette Midler, Sarah Jessica Parker, Kathy Najimy, Omir Katz and Thora Birch - 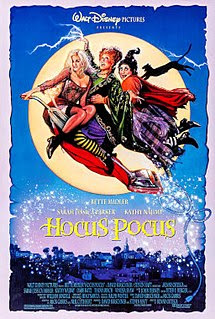 On Hallowe'en night three witches dead 300 years are brought back to life in modern day Salem and it is up to two teenagers an eight year old and an immortal Black cat to keep them from their evil plans.  I love this movie and have seen it many times.  Bette Midler absolutely steals the show at the Hallowe'en dance when she sings "I put a Spell on You" - Here is a You Tube Clip of the Midler singing the song...
___________
The last film I wanted to mention is "Sleepy Hollow" - 1999 - starring Johnny Depp, Christina Ricci, Miranda Richardson, Michael Gambon, Casper Van Dien, Jeffrey Jones and Richard Griffiths. 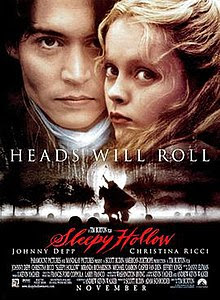 This truly American ghost story is a short story by Washington Irving and first published in 1820.  This version of the story uses the basic outline set down by Irving while expanding on some of the more gruesome aspects.  Set in 1799 New York, Ichabod Crane is sent to the small hamlet of Sleepy Hollow to investigate 3 murders.  The murders are all decapitations by the notorious ghost of the Headless Horseman.  As the murders escalate the story unfolds and culminates is some great action along with some twists to the story.  Here is the trailer from the film....
I really enjoy this film, on may levels.  First, the wonderful vision and touch of Tim Burton is all over this film - as Director of many fine films he brings to this film a great artistic sensibility that is top notch!!  The ensemble cast couldn't have been better - everyone is perfectly chosen and all work in unison as a group perfectly - I couldn't recommend this film highly enough!!  It is a bit gory and bloody at times, but not unnecessarily so and not too over the top.
There you go sports fans - 3 Fall/Hallowe'en films that are worth seeing anytime of the year - but are especially great treats at this time of the year.  In a week or so I will talk about Holiday films.....  I do love my Christmas movies, any suggestions???  Thanks for stopping by, do come again!
Take care,
edgar
Posted by Edgar at 7:14 AM