A couple of SAL's and a WWII Film

Gentle Readers and Dear Friends thanks so much for your kind comments yesterday!!  At this point I am not too sure how I will finish up the SAL piece.  I hadn't really thought of the finishing as I was really taken with the piece and the stitching.  I am thinking it might be a nice little framed piece instead of something else, but there is plenty of time to get that done.
I wanted to mention a couple of SAL's out there that you will be seeing me stitch here at Blacksheep.  The first is one that I got in on after the fact and am in the second round of stitching.  It is a really cute Winter sampler SAL that is a joint effort between The Thread Basket and C Mon Monde.  I just got the first piece the other day and have yet to pick out some linen - or do my usual changing of DMC to Belle Soie - I think this will be really lovely in silks.  The other SAL is being gathered together by sweet Vonna.  She has started up a great SAL Blog for us to work on the NEW CCN Monthly Cottages.  They are really great looking and should prove to be a great stitch.  If you remember I stitched up the LHN Monthlies last year as a single piece.... 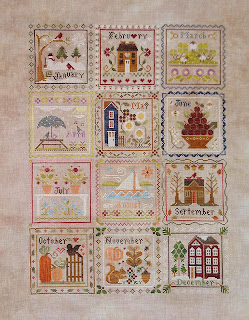 I really enjoyed this piece and must take a moment to thank once again Ma Teakettle as it was due to her generosity that I got my sticky little claws on the charts in her Gift-a-way and so was able to stitch this up.  It will be a gift this Christmas and hope it will be well received. Soooo...  with all that said I plan on doing these New Country Cottages as a single piece and you can watch that progress here over the next year as the charts are released.
__________
The movie I wanted to mention I saw a couple of days ago is called "In Tranzit" - 2008 - starring Vera Farmiga, John Malkovich, Thomas Kretschmann, Daniel Bruhl and Natalie Press.

The film, although very harsh, is wonderfully shot and although not typically "beautiful" there is some really great cinematography!!  Set in the winter of 1946 after the end of WWII a group of German POW's are sent mistakenly to a women's transit camp in Leningrad.  Based on a true story it is really the acting and NOT the script that makes this film worth seeing.  There are three super performances - 1st - Farmiga as the Doctor trying to keep her shell shocked husband close by while doing what is required of her.  2nd - Malkovich as the cruel Pavlov trying to root out the SS Officers that are mixed in with the prisoners - and 3rd - Kretschmann as Max - trying to hide his identity by flying under the radar while at the same time falling for the kind Dr. - his subtle performance was worth the whole film.  At 113 Minutes it is not too long -  this is an adult film for sure.
__________
There you go sports fans.  Thanks again for stopping by and for the great comments!!  Stop by again!
Take care,
edgar
Posted by Edgar at 7:12 AM