Gentle Readers and Dear Friends things are bee bopping along as always here by the Bay.  The weather is a'changing and it is going to be a cold and wet weekend.....  which means many movies and ordering food delivered!!  I do love that there are so many places that will delivery tasty treats so that I don't have to leave my house.
___________
Last weekend I was in a kind of musical/dance movie mode and so I hauled out my box of Busby Berkeley DVD's.... 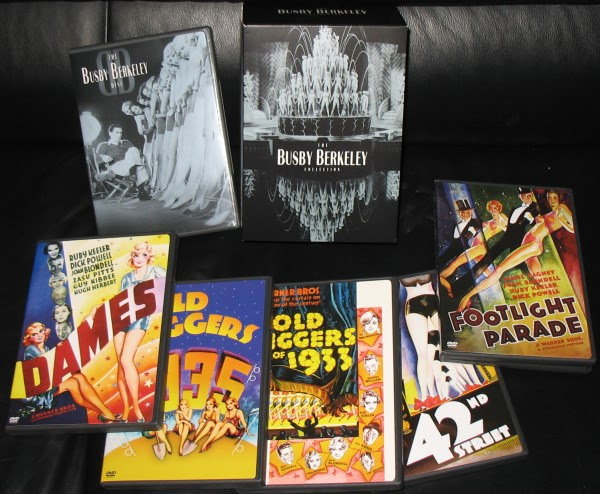 (a borrowed snaperoo)
I love these films and they are all so much fun to watch.  One of my favorites is "Dames" - 1934 - starring Joan Blondell, Dick Powell, Ruby Keeler, Zasu Pitts and Guy Kibbee.
In a nutshell from IMBD the story line is......"Multi-millionaire Ezra Ounce wants to start a campaign against 'filthy' forms of entertainment, like Broadway-Shows. He comes to his relatives families and makes them members of his morale-boosting campaign. But Jimmy, another relative is producing a show, starring Ezra's niece Barbara. But he had bad luck with his backer, this person has given him an invalid check. Another of his victims, the show-girl Mabel has the idea of blackmailing Horace, Barbara's father, whom she has met before in a slightly compromising situation to get the money."
One of the musical numbers from the film by that musical genius Busby Berkeley
....the title sequence in fact.....
__________
There you go sports fans.  Thanks for stopping by and for all the great films you have been mentioning in your comments!!
Take care,
edgar
Posted by Edgar at 7:04 AM