A little Stash and a crappy flick!!

GR&DF thank you for the nice comments about TiTD Sampler. It was a great sampler to stitch up and now with Hetty starting I can still enjoy stitching on a sampler. I think that samplers are such fun things - and I have a ton of them in the stash binders. Yesterday the mail brought some fun things - Here is a snap - 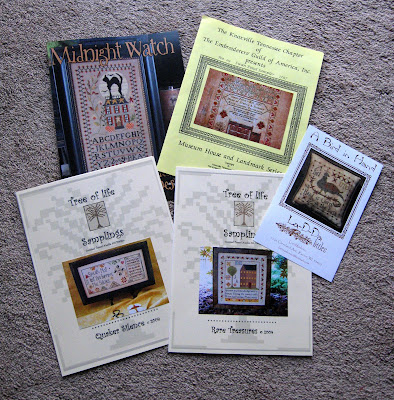 I was so happy to get them, not that I needed a single thing extra to stitch!! The Swan Pond Sampler I saw mentioned on another Blog (I can not remember where) and immediately called up Dixie Darlin and got me a copy. Of the new BBBD releases this one I knew I needed along with the La-D-Da piece. The two Tree of Life Samplings pieces are just great. Even with the bit of controversy over the second wording on the second piece.... I just love them both!! I know that there is a third release coming soon and I can't wait.

I did have a question about the linen I used - I think Gaynor was asking about the Meadowlark and where I got it - That linen came from Needle in a Haystack, and the Fog from Picture this Plus not Silkwevers came directly from PTP. You can call NiaH directly and if it is stock they can send you some as they are very helpful.

The flickers I have been watching are still Upstairs Downstairs and am wrapping up the Third Season in the next day or so and really enjoying rewatching them all. I did want to mention a flicker we tried to watch over the weekend. It was the remake of "The Women" 2008 - it was on HBO and so Rico wanted to give it a try...... after about 18 mins we turned it off - the poor acting, mis casting and just all around suck picture was more than we could stand. What ever possessed them to remake this film, after the complete catastrophe of a poor remake - "The Opposite Sex" - 1956 - is just beyond my comprehension. The Opposite Sex is not good, but fun and no where as bad the this newest version!!! We popped the DVD in of the far superior version of 1939 and thoroughly enjoyed that!! Do not even waste you time with the 2008 Women!!

Stitching on an exchange so no snaps!!

Thank you all for stopping by!!