A Gift, A Give-A-Way and a Gully Washer

GR&DF it's Tuesday and I pushed it a bit on the title - sometimes I just haven't a clue as to what to head this sucker with. At some point I know I will break and just put nothing, but until that time I will keep trying for the clever and descriptive - :)

Yesterday the delivery guy brought me a Birthday Gift from a dear sweet friend that already does so much!! We all know and Love dear Vonna - she sent me a great gift box of goodies from Dillman Farm in Bloomington IN. 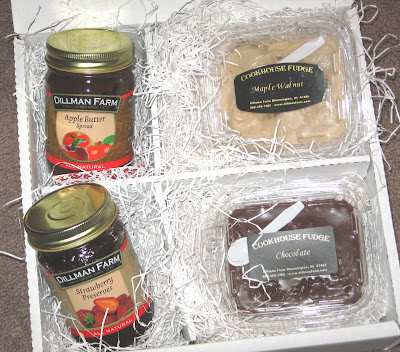 Included in the box is some Apple Butter (a favorite of mine), some Strawberry Jam (yummy) and two kinds of fudge - can you go wrong with any kind of fudge!!
What a great way to wrap up a Birthday!!

Keeping with a friends sort of Blog today - I wanted to have a small Give-a-way - As you saw yesterday I have finished up Sail Away - this was also a gift from a dear friend - Becky - a while back. Made even more special by doing it with a group of friends as a SAL!! I want to make a gift of the Instructions and chart to a stitcher out there that might want to kit it up their self. 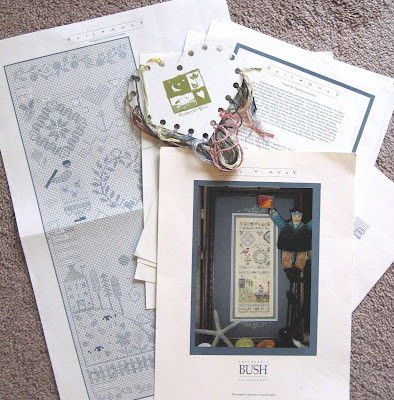 Here is a snap of everything including the remaining silks - there really isn't enough of any one colour - but you can get the idea of the colours required if you wanted to use some other floss. It is in very good condition as I always stitch from copies of the chart and not the original charts. So, if you would like this copy of Sail Away to stitch - and it is a great stitch!! - just leave a comment on this post before this Friday, October 16th at 3 PM PST. I will have the Hag Claw draw from the BOD (Bowl of Destiny) and announce the winner next Monday.

My stitching for the last couple of nights had been throwing a couple of strands of floss at TiTD and working on my exchanges. I do love them so but they do seem to stack up don't they!!!

The flickers on the tube have been that superior BBC series - Upstairs Downstairs and not I Claudius. When I was standing in front of the DVD's looking for IC I saw the UD set and thought "I hadn't seen that in a while." So off the shelf it came and I am working my way through the 4th Disc. The complete series is 81 episodes so it will take me a while to get to the end. Rico gave me the whole series a few years back and I watched it then but haven't in a while so I am very excited to rewatch them. I was also poking around on the Internet yesterday and found that they are in production for a 2nd UP series which follows Rose the house parlor maid a few years later into another position as a Housekeeper. It should bee airing next spring (I think) in the UK and eventually here in the States - I can't wait!!! If you have never seen the series I would highly recommend it. Each episode can be watched individually but it is always better to see it from the begging. To watch the progression through the years and see how all the characters develop.

Last but not least - we are in the midst of our first big storm of the season - a bit early - but a total downpour right now!! Here is a snap of it rolling in over the city last night..... 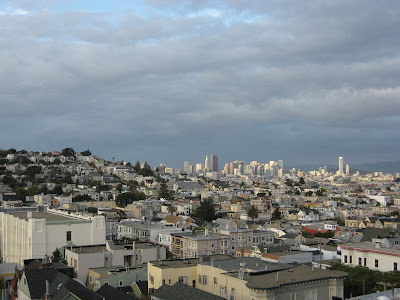 This was the last bit of sunlight breaking through from the west and hitting the buildings of downtown SF - aren't the clouds lovely!!

There you go sports fans!! Thank you once again for all the super nice comments - I do appreciate them and your time for writing!! Have a great rest of the day!