Back from the Brink

GR&DF that may be a bit much - "from the Brink" - but I left work early on Monday feeling like crap and then stayed out yesterday feeling not good and crappier - with coughing and raspy with phlegm - kind of achy in the joints - just sort of blah. But, I am back today at about 72% - which is up from the 31% I was yesterday morning. I even slept until 11:30am - which is unheard of - I would have probably slept longer but the school yard at the bottom of the Noe Valley was reverberating with the outdoor voices of children at play and I don't think a corpse could have slept through that. 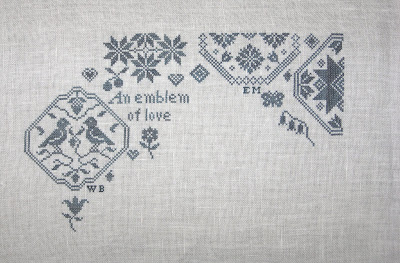 This is really a lovely piece of white linen with Wavy Navy blue floss - this picture makes it look all grey - I will get this in the mail in the next week or so to Deb as the next great shifting will be in about 3 weeks on 10/27.

Aside from that stitching I did nothing but sit around in my sweats and watch TCM. I did want to mention a couple of movies I saw over the weekend that were pretty good. The first flick is called "Sweet Land" - 2005 - a wonderful film about a mail order bride from the "Olde Country" coming to rural Minnesota around 1920. This love story is told in flash back - first back to the late 60's then another flash further back to 1920. I really enjoyed this film and would recommend it to just about anyone. The photography is just great. The second film that I also enjoyed was "The Visitor" - 2007 - a very good film - but it might not be to every ones taste dealing with illegal immigration and apartment squatting. It is a short film at 104 mins so I would suggest giving it a try.

There you go sports fans - Thanks you for all the kind Birthday wishes!!! Do stop by again!