The Prince and the Showgirl

Gentle Readers and Dear Friends I thank you so much for the warm kind comments about yesterday post.  On this very rainy and cold morning it warms the heart to read such nice things!!!!  I wanted to answer some questions you all had...  I am working Shores on 36ct LL V Autumn Gold (I think it is the recommended linen )  It has been so long since I started this piece I do not remember if it was "Vintage" or not... but the mottling of the colour leads me to believe it is.  I am also using the recommended NPI silks - I love working in silk as the "flow" of the needle is so much nice - like butta!!

Last night my "stitching" time was finishing up and putting the final touches on an Exchange piece I plan on mailing tomorrow - and some border stitching on Shores - That is the one change I did make on this large piece - the original charted colour for the Block borders is black - well, I knew I wouldn't like that so I am stitching them in a very dark blue - a subtle change but one I think make a world of difference.  i figure that there is so much blue why not a bit more.
_____________

Also, last night the film for the evening was anew DVD release "My Week With Marilyn" - 2011 - 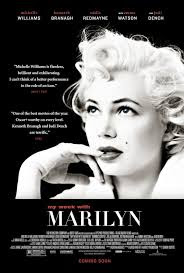 ....which are the reminisces of Colin Clark, 3rd Assistant Director about his time on the set of the movie "The Prince and the Showgirl" - 1957.

I thoroughly enjoyed the film and found Michelle Williams quite good - it seemed to capture the spirit of the production and fragility of Marilyn during filming. I can certainly see why both Michelle Williams and Kenneth Branagh were nominated for Oscars!!  I would totally recommend this film  - and would also recommend the film and book it is based on.  The book has much more detail and fleshes out the "behind the scenes" a bit better - a very good read.  Tonight I expect another of my "Oscar" films "The Adventures of Tin Tin" - if it shows and I get to see it I'll talk about that in the morning.

That's about it for today sports fans!!  Thanks again for stopping by, do stop again!