Gentle Readers and Dear Friends I was having so much trouble with Blogger yesterday that I just gave up and there was no post.  For some reason There are things I once could do and now can not and things I have a clue why they don't work with Blogger.  So I am hoping that today will be smooth sailing.
__________

Not too much going on still working on an exchange piece - except last night - I was off by on stitch as i neared the end of a section and didn't realized it until I popped the piece out of the Q-Snap - so i so spent most of last night unstitching - gotta get the frog off my back!!  Tonight I will go back a re-stitch and hopefully finish up the stitching part - there is still the finish part to complete - I have everything so there is not a problem or hold up there.  I would love to have it in the mail on Monday - but "best laid plans..."
__________

Recently I won a "Lot" of stitching things off of the Bay of evil to get a single thing, which left me with quite a few duplicates - and then going through the stash hep found some other duplicate charts and things I have stitched....  which lead me to an update on My  "Stash for Sale" Blog.  I do like being able to move on some charts to others.  Do let me know if there is anything you would like.
__________

How about a basket of Who Hound to end the week on..... 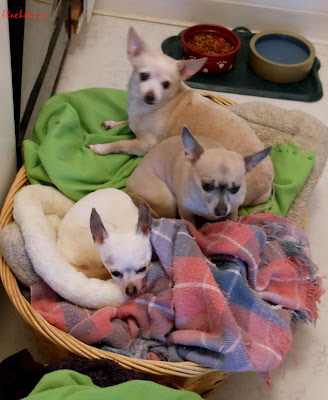 We have three big hound baskets, yet they often must crowd together into a single one.  I think the Smokie-nator was running around being his usual crazy self!!

That's about it for today sports fans.  Thanks so much for stopping by and for your continued kind comments, questions and support!!!!!!  It means so much to me.