GR&DF another foggy day by the Bay - so much fog that even the news this morning was babbling about the thick layer over us. Thanks for the great comments - Jeanne mentioned another of Rosalind's flickers - "Trouble with Angels" - 1966 and its sequel that is not as good..."Where Angels go Trouble Follows" - 1968. There are other fine performances out there...like.... "His Girl Friday" - 1940 - co-starring Cary Grant and her break out roll in "Craig's Wife" - 1936. So many fine performances check them out if you get a chance.
__________

About the Give-a-way, Rico got an engagement calendar for 2011 that he will not use and thought that there might be someone out there who could use and appreciate the snarky humor of this little gem. Here's a snap of the cover...

and here is one of the great pages inside....

Some of the pages can get a bit racy, but they are all really funny. So..... if you would like a chance to win this great little calendar, just leave a comment on this post only and we'll get out the BOD this weekend and have the who hound pick a winner. I'll announce it on Monday. Anyone, anywhere may enter and I will send it to wherever you are, but you have to post a comment to win.
_________

I couldn't help myself.... last night I needed to get a move on the LHN Monthly Squares. I got a great piece of linen out of the stash heap and slam bam I had a new start, Thanks again Ma Teakettle!!!!! Here's a snap..

It's not too exciting but this is the outside border of January. I changed up a floss colour - I think if something says medium green then it should be a green colour and not beige/brown, but that's just me. I think I will go along like that for the whole piece - change out where I thinkit will be a better choice. I have lots of CC Floss and so substituting the colours around will not be a problem.

That's about it for today sports fans. Thanks for stopping by - and remember if you would like a chance at the Give-a-way just leave a comment on this post. Thanks again!! 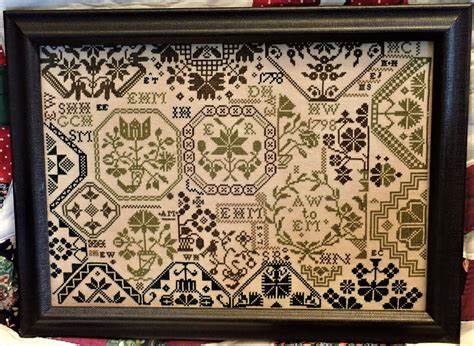