GR&DF it is here - finally - the day of the week we do not dread - as Mondays are a downer -Fridays are just duper de duper!!!

Last night I was cleaning/straightening/shifting the crap around and instead of moving some frames upstairs and into the closet where they belong I thought tomyself - "hey self, why not just frame something!!" So of course my mind shifted to something more fun than messing with the mess!!!!! And, the result is this - 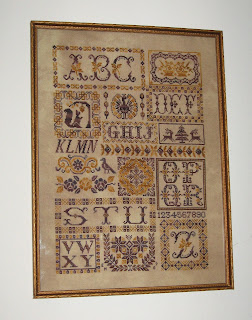 I am liking the way this looks in this old wooden gold frame. The piece is so busy that any bigger frame would look way heavy. After the last tack was in I got that sucker up on the stitching wall!! Here is a rather crappy snap of this space which I have the darnedest time trying to get a snap of - 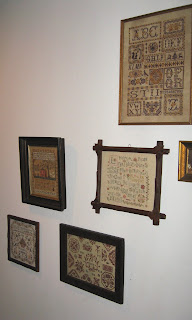 I then got to some exchange stitching.

The "big storm" is pushing in from the Pacific ocean this morning and Mission street is already showing the wet of that mess and I think today, tonight and even in the morning the rains are going to be heavy and the winds blustery - which sound to me like a warm, stay in the house stitching weekend!

Just so you don't think I did nothing constructive last night I did get the four loads of laundry washed and put away so I don't have to do it this weekend!!

The flickers last night where - "Guadalcanal Diary" - 1943 -starring Lloyd Nolan, William Bendix, Richard Conte and a really young Anthony Quinn. A hard hitting film version of the first offensive in the Pacific Theater. Just one year after the actual invasion it was an amazing movie for the time. This was followed up by "Gentlemen Prefer Blondes" 1953 - a great musical romp starring Marylin Monroe and Jane Russell and aptly supported by Charles Coburn and Norma Varden. A really fun film that if you haven't seen it you should make the time.

There you go sports fans - Have a great weekend and do stop by again!! 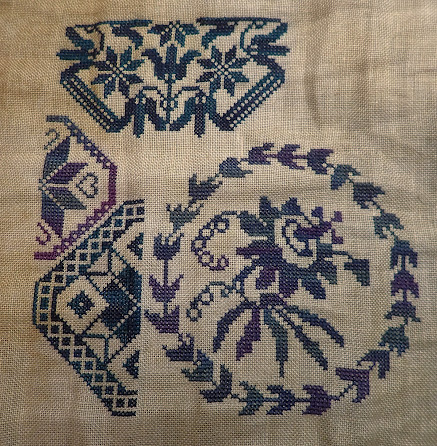