An exchange arrives, some major PS Stash and 2 flicks

I got some great mail yesterday - I was in the harvest Exchange on the SBEBB and my partner was Leena. She also stitched for me in the Fall House exchange and made a lovely tea tin cosy. I was once again the recipient of her super stitching and received this really sweet piece - 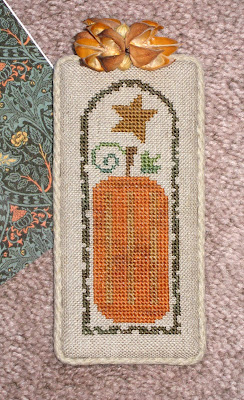 I really love pumpkins and they are a symbol of the fall harvest. Leena finished it off with a dried thistle pod. Thank you so much Leena once again for such a lovely treat!!

I also had received a package I had totally forgotten about. A while back I won on eBay a "lot" of PS Charts. It included a bunch of low numbered books, including numbers 1 & 2, that where out of print and that I didn't have. The lot also included quite a few early PS Santa cards that I didn't have (and some I did). First off I was stunned I won this pile and the relatively low price I paid, but whatever.... so it arrived and I am just bouncing off the wall!!! Here is a snap - 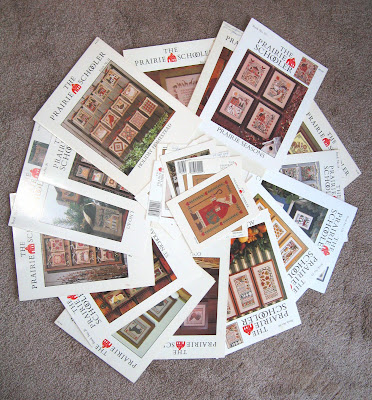 Some do have little notes or the occasional bookplate from the original owner but they are all in really super condition. This really fills out the list of charts I was looking for and chasing down one at a time. With so many of these charts hitting the OOP list I am having to get them on the secondary market which is quite an adventure in hunting!! I have found that the Autumnal and Christmas charts are the hardest to get - so if you got 'em hang on to them!!! I did want to answer a question from yesterday's comments - the Cardinal I am working on is a Prairie Schooler chart called "Birds and Berries" and is OOP and a hard one to find - or it was for me - but the Book has four bird designs and I think they are really sweet! Flipping around the blogs lately I have seen lots of PS being stitched - I wonder why that is??? I often wonder about the popularity of designers - every now and again there seems to be a designer that lots of stitchers are stitching and then it shifts to another designer and they are the flavor of the month - I wonder why????? Oh well - too much to think about on a Wednesday.......

I worked on finishing up two exchanges -
getting them ready for mailing tomorrow so no stitchy snaps.

The movies last night were - "Handful of Dust" - 1988 - what an odd empty movie - the book is supposed to be really good but this film translation was a bit long on "not much going on" with a bazaar ending. It is basically a study in lives of artifice and emptiness. Lovely production and the acting is superb - but a bit dull - I really liked Anjelica Huston in this as always superb!! This was followed up with "Top Hat" - 1935 - The evening ended on an up note - cha-ching!!!! Who can beat a super duper Astaire and Rogers flick!!! Along with all the fake scenery and back lot filming - so thirties and such a winner!!!!

Thanks for stopping by and all the really nice comments
- they mean a lot!!!!!