Exchange arrives and some movies - 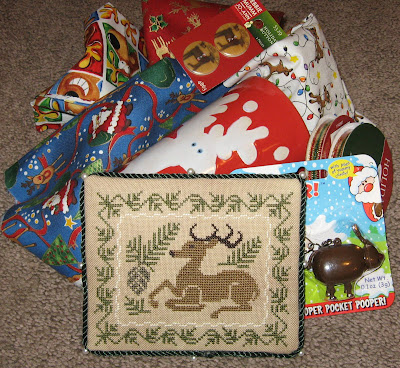 I stitched her up a Pyn Keepe - I modified one of the PS Winter Samplers that I really love - I was very pleased with the way it turned out. The package included some reindeer themed extras I thought Becky would enjoy.

Last night my stitching was on an exchange that is coming up in the far future
- so no snaps of that.

Over the weekend there were a couple of flicks I wanted to mention - starting off with "The Stork Club" - 1945 starring Betty Hutton. This is a really cute musical vehicle for Betty - co starring Daniel Defore and Barry Fitzgerald. The DVD was from Netflix and you probably couldn't have found a worse copy of the movie. The second flick was "Thank Your Lucky Stars" - 1943 - The premise is a couple of produces played by Edward Everett Horton and S K Sakall putting together a cavalcade of stars for a wartime charity show. One of the numbers I really enjoyed was Ida Lupino, Olivia de Havilland and George Tobias (Abner Kravitz of Bewitched) doing the jitterbug - very funny!! This film along with "This is the Army" - 1943 and "Hollywood Canteen" - 1944 are being released as a three DVD Box set called The Home front Collection.

Thanks for all the great feedback yesterday!!! and
Thank you all once again for stopping in and visiting!!