Stitching, Stashing and a couple of movies... 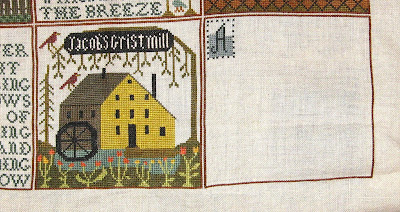 This is the only stitching I can show as most of my energies have been working on exchange stitching - but the VoHRH square 8 is finished and I have started on square 9..... I had hoped to finish this before the end of the year but I don't think at this point with my other commitments that it is possible... I really liked stitching on the Grist Mill and this square 9 is mostly words so it should work up pretty quick. I have the next three exchanges stitched up but not finished so I think this weekend will be some heavy duty finishing action.

The stash acquisitions I got in Vancouver came from knitting store. This store is one my sister loves and goes to frequently for supplies and for knitting evenings and is called Stitchcraft. It is a really lovely store owned and run by Nicolette. She specializes in organic supplies
- here is a snap of the fabric and tape I got last Saturday - 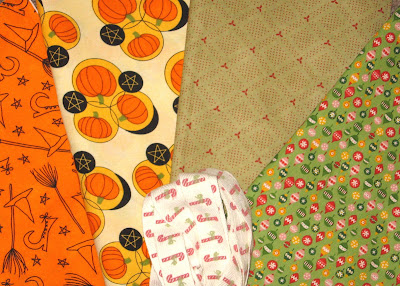 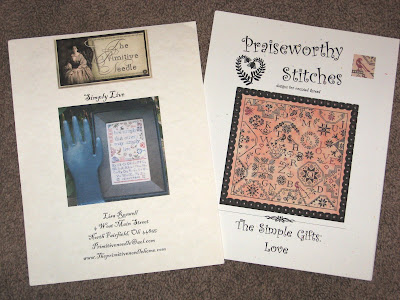 These two lovely Quakery charts are new to me and of course I had to have them. The "Simply Live" chart is so nice I might just have to start that up soon..... I have most of the floss and what I don't have I can switch around.....

Now on to the flickers.....I have seen about 20 or so movies since I last yapped about them - but I won't drag on about all that- I will mention two that I really enjoyed. The first is a Halloween movie called "Monster House" 2006 - an animated feature film that was very good and little intense I would think for really little children - but a good story and well done!! The second is a film that I had not heard of but read about so I got it through my Netflix account - "Vatel" - 2000 - What a spectacularly gorgeous film - starring Gerard Depardieu and Uma Thurman - The film is set in 1671 over a three day visit of Louis XIV and court to the Prince and Princess de Conde at their chateau in Chantilly on the eve of the war with Holland. Although the are some real historical problems with the film.....the story is based in truth and the film production is really a wonder - I would highly recommend this film as a small window into the intrigues of Love and Politics at the court of the Sun King.

There you go - Have a great All Hallows Eve and Jour de Mort!!!!!

Thanks for stopping by!!
Take care,
edgar
Posted by Edgar at 7:24 AM