A Little Finish and a Little Start

Gentle Friends, I finished up the CtA piece far sooner than I had anticipated and it was a really fun stitch and I wanted to publicly thank Brenda for this super piece and the commemoration of a really important point in American history that repercusses to this day!!  Here's a snaperoo of the finished piece...

... I took about 15 snaps and couldn't get the light right but you get the idea...  I've rolled it up and put it into my "very full" completed box of stuff to be framed etc....  I think it's interesting that where Mary Brewster's name is stitched that the overdyed linen lighted up.  One of the things that makes it special is that I am able to trace back through my family on my mother's side to Mary Brewster and Fear Brewster Allerton ( Mary's daughter and the 2nd Mrs. Allerton, Mary Allerton who sailed on teh Mayflower died that first winter)  It's also interesting that Mary Brewster was one of only four of the women to survive that first winter and were left to help establish Plimouth Plantation (now renamed Plimouth Patuxet for the 400th Anniversary) and help create the foothold that England was to make over the next decade in the New World.  I also really enjoyed "stitching in season" it's fun and makes the whole of Fall a bit brighter!!
__________________
My next stitch is a new start since I decided to not get back to the big BBD sampler I'd been working on over the summer.  I decided to stick to the "stitch in season" that just happens to be Christmas and winter... so looking around in the old stash pile I found a chart I really like and have had since it was released back in 2012 by... The Scarlett House called "Christmastide at Holly House."  I'm stitching it on 40ct "Fawn" from Lakeside Linens and using the called for silk mostly, which is a mix of NPI and Belle Soie.  I've already switched out the called for NPI white for the snowflakes for Belle Soie's "Icing."  It's a softer white and when I think of the snow I think of soft flakes falling quietly...... 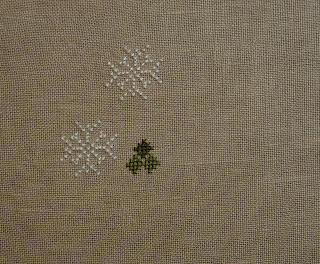 Labels: The Scarlett House - Christmastide at Holly House -, With Thy Needle and Thred - Coming to America 1620-2020