A Weekend with FDR

Gentle Friends it will be slim pickins' about stitching on the Blog for a few more days as I am still working on an Exchange piece - so I will talk about a film I recently saw...  "Hyde Park on Hudson" - 2012 - starring Bill Murray and Laura Linney. 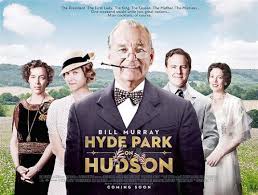 This film is set in June 1939 and the American visit of King George VI and Queen Elizabeth.  During their stay they travelled to the Hudson valley and stayed at the country Estate of the Roosevelt's in Hyde Park, NY.  The films also explores the relationship of FDR and his sixth cousin Margaret "Daisy" Suckley.  Filmed in England, but looking very upstate NY -the film was a pleasant surprise.  I thought it was well acted and looked beautiful - the film is worth a look for the absolutely spectacular automobiles and the beautiful countryside.

That's about ti for today sports fans,  thanks for stopping by, do stop again!!