A Steamer Trunk Full of the Past

Gentle Readers and Dear Friends thanks so much for the kind comments about March Cottage - I really like that these little bits finish off so quickly.  Today's post is about things from the past....  I think of it not as just my baggage but as a gigantic steamer trunk of memories and schtuff - more descriptive and antique sounding....

Last night at a loss to start something new (if you can believe that!!) I hauled out the WIPS's and then pulled out ATS - you remember that.  I started that a loooong time back.  For who knows what reason I put it in its bag and into the "Basket o' WIPs."  So this is a piece from the past - there are quite a few pieces that need some attention, but it was ATS that got it...

As you can see I am still working on the angel - getting the picture before I stumbled off to bed -  I was even to lazy to -  1) take the piece out of the q-snaps and 2) even remove the needle, but you get the idea.  I have seen this piece popping up recently in the Blogosphere, both finished and in the process of being stitched and was happy to put some more stitches into mine.
__________

Now on to some mail that came yesterday - not only do I enjoy old films but I enjoy old many TV shows  - now long out of production and only available via DVD.  This led me to thinking just before Christmas when asked by a certain person "hey, what do you want for Christmas??"  Now, I thought about it for a few daze (notice I did not say days) I did not want something practical.....  so I came up with "How about the "Roseanne Series" on DVD??"  We did some research and found that not only are the DVD's OOP and available only on the secondary market, but the entire series was just stupid expensive.  So I said "let me find one on eBay - I had seen them crop up pretty frequently - so I have been trolling the bay of evil for the last few months or so and have finally gotten my set....  it was for the entire series as a "Buy it Now"....

What is so crazy is that most of the Seasons in this "used" BIN where never even opened so they were still NIP - thanks so much to my sweetie!!  and a very Merry Christmas to me!!!!

Keeping with the nostalgic DVD theme today - we found - last weekend at the Goodwill a complete set of...

H.R. Pufnstuf - I remember watching these every Saturday morning in the weekly cartoon lineup in the early 70's and then in syndication for years afterwards. So to my everr growing collection od about a bazillion DVD's I add these!!  You just can't beat Witchiepoo!!!! 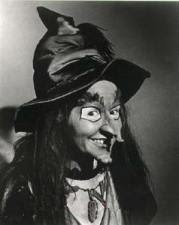 There you go sports fans.  Thanks for stopping by and for your great comments - keep em' coming!!