A Great Film and a not so Terrible Re-Make

Gentle Readers and Dear Friends such wonderful comments and kind wishes!!!  Thank you so much!!!  With not too much going at all - I am caught up on my Exchanges, for the moment. I really enjoy them, since they let me stitch on smaller things and have those quick finishes that are so good for the ego.
___________

A week or so ago I took advantage of the Warner Archive Sale - what's the Warner Archive I hear you say??  For movie fans that want the more obscure or hard to get films that are not going to be released in wide distribution - the WB Shop  has created the BOD (Burn on Demand)  DVD's - It is a great site to get DVD's of films you love!!  One of my favorite films is "The Women" - 1939 - 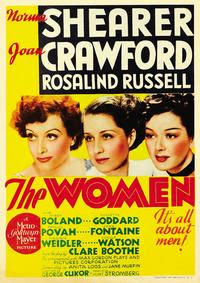 Starring Norma Shearer, Joan Crawford, Rosalind Russel, Mary Boland, Paulette Goddard and Joan Fontaine.  A really snappy movie from the play by Claire Booth Luce.  Absolutely a top notch film and if you've not seen it you should.

This film has been remade twice, once in 1956 and called "The Opposite Sex" - a giant CinemaScope technicolor musical.  It was remade again as "The Women" in 2008, but that was just not very good.  It is the 1956 musical version that has never been released to DVD that I finally acquired on BOD from the WBShop.

This version of 1956 starred June Allyson, Joan Collins, Dolores Grey, Ann Sheridan, Joan Blondell and Ann Miller.  This over the top beautifully shot super colour saturated film is lots of fun.  It retains much of the dialogue from the original film, but goes at a slower pace and is set in the world of the NY Theatre.  Although shown occasionally on the Tube - they usually show a Pan and Scan version, this DVD is the full letterbox edition and has been remastered for a great looking film.  So my suggestion is to see either the superb 1939 or the good 1956 version and skip the 2008 one.

Here is the original trailer for "The Opposite Sex" from You Tube via TCM....

That's about it for today sports fans, thanks for stopping by ... do stop again!!