Gentle Friends, a clever title escaped me this morning so I went with a silly title.  Since Tuesday is all about "cake" I'll talk about Sundays baking adventure.....  I found the recipe over at Brandie's Blog "Country Cook" and it got there by way of a cookbook called "Come Home to Supper " from Christy Jordan.  Called "Elvis Presley Cake" - I was intrigued to say the least.  It comes together really easy with the cake part a basic yellow cake .........  here's a snap... 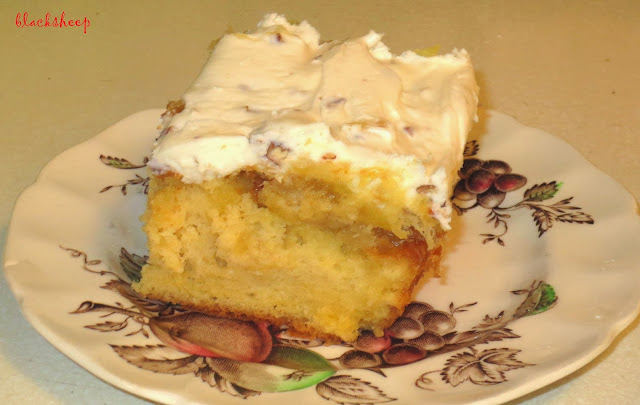 ....  the only downside to this cake, and it is hardly a downside is that when I went to cut it I found it to be a be sticky where the pineapple layer was and it tended to pull on the knife, but that is small potatoes with such a really tasty cake!!  Easy and quick  - give it a shot!!!  Thanks Brandie and Christy!!!!
_____________
That's about it for today sports fans, no stitching last night because of the Estate Planning workshop at the Lawyers - which by the way went spectacularly well.  The  workshop went way over time, but that didn't matter, it was VERY informative!! I left with not only a ton of information but with the following legal paperwork signed and in place...... My Will, My Health Care Directive, and Power of Attorney for financial maters, all these things just in case I become incapacitated.  At 50, I ain't gettin' any younger....... I would highly recommend everyone getting these things in order because if they are not in place and something, god forbids happens, then it is NOT your decisions any longer to make.... but the courts will step in and make the decisions for you.......  I would rather make the decisions now while I can -  than let some stranger who doesn't know me or have a clue as to what I want make them for me!!!!  Kind of a control freak in that regard!!

Thanks again for stopping by, so stop again!!