Gentle Friends, I got it together enough to bake up some treats for sending out to my Family and Friends, near and far away... it seemed that time just was whooshing by... I was thinking about it all Fall and I finally decided to bake up one of my Mom's recipes... one that she always made during the Christmas Season...  baklava...  a traditional Mediterranean flaky pastry made with nuts (usually walnuts and pistachios), phyllo dough and a sweet syrup of honey and sugar...

I figured out how much I needed and calculated that five 9x13 pans of the stuff would do... 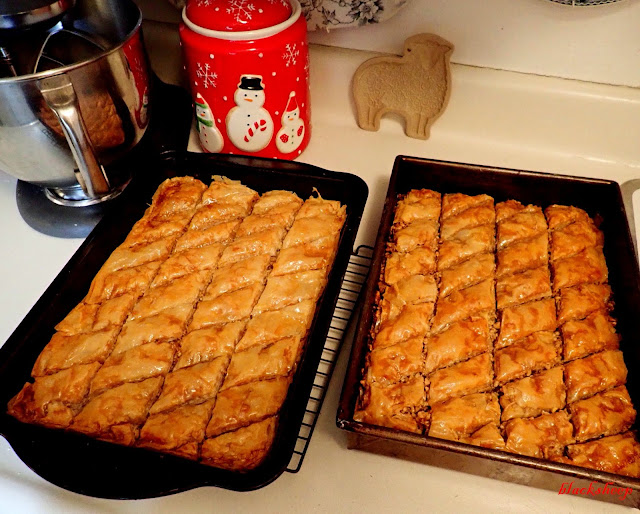 My Mom started making baklava way back in the 1990s and it eventually became a staple of her Christmas baking regime... other things that were staples at my house ... cranberry nut bread, Mississippi Mud Cake, and various cookies, little orange blossom cupcakes... coconut cake and pound cake...  She got the recipe from a good friend in the Museum Guild she belonged to and that's the recipe I used, with a couple of tweaks.... of course... I jazzed up the syrup with a bit of lemon and for the teaspoon of cinnamon that is called for, I replaced it with my own Fall 6 Spice blend.  The fifth and last pan also got another tweak as I was running out of walnuts I ended up just replacing them with pecans (my favourite nut) and it turned out deliciously well!!  Now that the outside gift-baking is done I may end up making a few treats for us and our Christmas guests that are coming .... who knows I get mighty nostalgic around the Holidays!!!
__________________

Thanks for stopping by sports fans.  Right now I have no plans to Post next week I am taking some time off.... but you never know???
Have a super Christmas!!