Blogging Buddies it was a very quiet evening - thank goodness.  I was super lazy and hauled out the enchilada leftover for dinner!!  It was just as good on it's return engagement the second night.  I plugged in the tree - yes, my tree is still up and blinking brightly!!  With everything else gone it is only the tree and that is left and that must come down tonight.  With the January Cottage completed and February chart in route I was sort of between projects - well, not really ... I guess I could of pulled out a WIP but why do that when I could here something new calling my name... start em.. start me... start me..........   So I gave in  - after about a half second - and started something I kitted up for Christmas.  If you cast your mind back a few months you might remember I had everything together to start BBD's "Tis the Season" so out it came and I made a pretty sad little start... 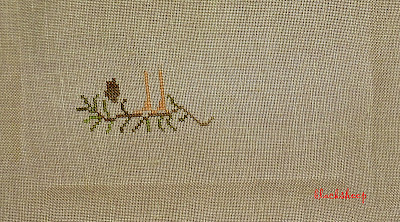 I am using the called for Belle Soie and stitching it on LL "Pear" - which looks mighty like a shade of khaki and not very greenish, but nice.
The reason not much stitching was getting done is that I started to watch - on DVD - the super costume drama "Edward the King" - 1975 - starring Timothy West as Edward VII and Annette Crosbie as his Mother, Victoria. 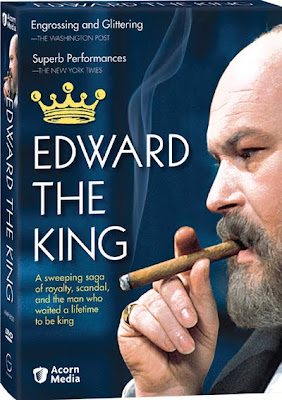 I got the first two discs last night and got through the first one and about half way through the second.  I watch it up to the point just after Edward survives his attack of typhoid fever in 1871.
____________
The recipe for "Orange Blossoms" is posted over at Blacksheep Bakes so you can click HERE to go there.
____________
That's about it for today sports fans.  Don't forget to sign up for my Gift-a-way on THIS Blog post.  Thanks for stopping by today, do stop by again.
Take care,
edgar
Posted by Edgar at 7:07 AM