Gentle Friends, if you've been reading Blacksheep Blog for a while, you know that I watch quite a few films..... I really like films.  I like lots of different film genres........ Noir, Musical, Animation, (some) Westerns, War Films......  you get the drift.  I own many of the films I like in both DVD and Blu Ray format.
Recently I was asked a very interesting question about my film watching, "Do I really watch the films I own?" and if I do "How do I choose what to watch from so many titles?"  That got me to thinking how I go about watching what I own......... during the week in the evenings, If there's nothing on the TeeVee and I've not gotten a Netflix Selection, I usually just flip through the pages of one of my DVD notebook cases and when I hit one the looks good I pull it and pop it in -
et voila something decent to watch.

The weekends are a different matter altogether.  I usually start thinking about a theme or an actor or something might hit me  that gets me going  - and from that idea comes a selection of films to watch.  I'll usually pull 5 to 7 films to watch.  I usually start watching Saturday afternoon after getting home from my "Thrifting" and just keep going film after film until Sunday evening.   Now, the exception to this "festival" is there may be something on TCM that I want to see so I will work that in the lineup or build the selections around that film or films...... so you see there is a little method to the madness.......  that brings us to last weekends "Film Festival."

I was in the mood for a Musical Film Fest - not just any musicals (and I have dozens) but some top notch, over the top, Theater to Celluloid type musicals.......

I pulled all Rogers and Hammerstein Films and started off with.......

Next up is another favorite R&H film..... 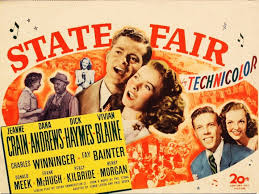 "State Fair" - 1945 - starring Jeanne Crain, Dana Andrews, Dick Haymes and Vivian Blaine.  I love everything about this film, the super songs, the silly acting (at times) and I just love the whole arch of the Ma Frake and her Mincemeat entry at the fair.  From the fair I moved on to.....

"Flower Drum Song" - 1961 - starring Nancy Kwan, James Shigeta, Miyoshi Umeki, Jack Soo and Juanita Hall.  A nice film with some great music, but a little silly plot wise and a bit stilted, but still a fun film.  From this film I moved on to......

"South Pacific" - 1958 - starring Rossano Brazzi, Mitzi Gaynor, John Kerr and Juanita Hall.  A super film with great music and dancing.  A film with an important theme that still resonates today.
I wrapped up the weekend filmfest with a lovely film...... 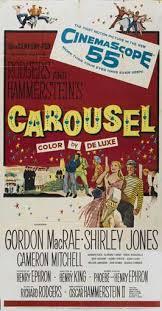 "Carousel" - 1956 - starring Gordon McRae and Shirley Jones.  I think the Carousel Waltz one of the most beautiful pieces music that R&H ever wrote.........

That's about it for today sports fans, have a super weekend!!!