As you can see I have finished the top alphabet. That white spot I guess is some camera flaw as my picture taking is always so flawless, HA HA.

Here is Serenity as it stands now with the alphabet and the bits starting to fill in. The misc initials are for, on the left , Hunny, Pete and Peach and on the right, my nieces and nephews, Mathew, Katie Leslie, Tucker and Ashleigh. I am waiting for my LNS, Needle in a Haystack in Alameda to call with my order for the boarder. It will take a lot of floss to complete and I wanted it to all be form the same dye lot.

I also started another Quaker sampler called "Rebecca Jeffcoat, 1800." I am working that on the recommended fabric, 32 count, Belfast linen in Antique Ivory. And working the design in the recommended Au ver a Soie Floss'. It will be much different than the SAL as the colours are very muted and pastel pale with only a few dark spots. I will post a picture of it when it actually looks like something.

This is the beginning progress of the Quaker SAL, Beatrix Potter's Quaker Sampler. I am very pleased with the way the silk wine coloured floss looks on this linen fabric. In doing this one in such a dark colour really made me think about the new RJ sampler and doing that one in the pastel colours. Very different but still kinda the same......

Memorial day was spent watching war movies on TCM. From "Here to Eternity" with Miss Deborah Kerr, tramp wife and Miss Donna Reed, tramp with a heart of gold....then on to "Sgt York", country boy does good.... followed by "Stalag 17", one of my favorite movies, with William Holden as the supposed snitch. It was a very good movie day. It always amazes me that the only wars that are remembered are WW1 and WW2 not that they were not important but there was a lot more death and destruction that makes up the American past. Off the soap box now......

Starting on the Alphabet, Saprano's and Charlotte's Web....

I Have started the Alphabet on top. Not too much done so far as I have been busy trying to get things ready for my upcoming vacation in 2 weeks. I did finish the lower bottom left medallion but in my rush to get out of the house this morning neglected to snap a pic of it. That will come on Tuesday as I do all my uploading and blogging from work. The dinosaur of a computer that I have at home just duz not cut it for this kind of stuff.

We start on the Beatrix Potter SAL over at Quaker Inspired on Sunday, I am really excited as I have been wanting to do this sampler for quite a while.

No Soprano's on Sunday and only 2 more to go, what will I do on Sunday nights!!!!!! I hope it does not end in a blood bath but I think we are skidding along out of control towards that inevitable ending. Only time will tell.

I belong to a DVD rental club GreenCine which is kinda like NetFlix, but based here int he Bay area.... it is where you continually have 2 DVD's in rotation through the mail. Last night I got the new "Charlotte's Web." Now I was all jacked up to really not like this movie as I have always adored the book and other writings of EB White, and the cartoon I grew up on AND the really big AND....... I often do not care for Dakota Fanning, as with most children/actors I feel they either over act or just trade on being cute for the camera..... all that said I totally enjoyed that movie. My tastes in Movies tend to be from the 30's through the early 60's with a few contemporary titles thrown in for good measure...... but C'sW I thought really captured the felling of the timelessness of the story and the good feeling that one can come away with when something is done right. I would suggest that if you haven't seen this flick then give it a chance, you will be pleasantly surprised, I certainly was!!!!

edgar
Posted by Edgar at 7:23 AM No comments:

Last week my computer got some kind of virus that made it crash so I was out of commission for a couple of days until the IT people could whip it back into shape. Then there was car problems , replacing the alternator then getting four new tires and an alignment.....that ate into a chunk of money that I was not planning on spending........ :(
I am joining a SAL and we are doing the Beatrix Potter Quaker Sampler and so I went out and spent a good deal of time trying to make up my mind. ( There are just way too many beautiful floss' out there to choose from)

This is the Linen, Belfast 32 count Vintage Autumn Field, using Soie d'Alger #4625, which is a really deep wine colour. The linen is really good looking also as it has the appearance of mottled wine stains and will work well with the silk.
Serenity is still bee-bopping along. I really did no stitching this weekend as we had friends over Saturday and then Sunday went out with other friends so that cut into my down time with the needle. Last night I got to work on my x-stitch so I was back in the swing of things with Serenity as you can see

This is the medallion that is on the right that I finished last Thursday.

This is the medallion of the left as it was last night. The browns are really looking nice.

This is an overview of the nine medallions as they appeared last night at 11:04 pm. I still need to do the alphabet on top and the leaf boarder around. But that will come in time.
Take care,
edgar
Posted by Edgar at 10:19 AM 1 comment:

Happy Tuesday.... this past Saturday I took off from work and went on a culture adventure...........Our first stop of the day was our favorite breakfast place, Eddies. Voted repeatedly as the best breakfast in SF WEEKLY, a local paper, yearly poll of all things in SF.

The second stop was the Legion of Honor. This is a beautiful museum over looking the entrance to the SF Bay and the Marin Headlands. We went to see the temporary exhibit of French jewelry. Lets just say that there was so much sparkle and shine it was hard to not keep my head from spinning. The exhibit included things that I had only seen in books. Including some pieces of Dame Elizabeth Taylor's. Overall a truly worth while experience.

director in Historic Houses and in a very large art We then made it to Golden Gate Park where the De Young Museum is to see the temporary exhibit from the V&A (Victoria and Albert in London) of Vivianne Westwood. The exhibit was really good. It was a chronological look at her designs from the punk beginnings through to the glamours things she has be doing int he last 10 years. This was the first time I had been in the new building. Now my background is museum work and in a past life I have been a curator and museum director......so I approach museums in general with that knowledge....all I will say is that I really do not care for this building as it looks like is has been encased in rusty metal. That's all I will say about that.

Here is the middle left medallion progress from the last couple of days. Not the best picture but you get the idea. I really like the Just Rust and the Tartan Plaid floss together. As you can tell the main body of the work is composed of nine medallions with the Left and right using opposite floss for the inside and the surround.

Hope all is well out in the world with everyone.

The puppies, SF and some needlework

Happy Friday, I thought I would start off with the three rulers of my roost. First there is Peaches, the buff 4 year old, then there is Hunny, the 14+ year old frosty faced little girl and finally there is Pete our white 7 year old nervous little man. The rule the house and boy do they know it!!!! 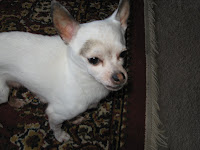 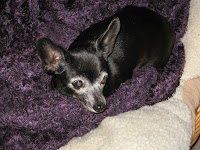 This picture is looking east towards downtown SF and the Bay Bridge with the glorious fog just rolling in from the Bay. We have had 2 days of really warm weather, or I should say warm for here, upper 80's. But , I always say if I wanted to swelter in the heat I would have stayed in Florida......

Now for some of the needlework....this is a closeup of my favorite section on the piece called "Serenity" my current wip. The flosses are from Crescent Colours and are called Just Rust and Tartan Plaid. The next picture is what I have done so far, I've only been working on it for a couple of weeks so it is not too far along yet.

That's about it for today....... more to come on Monday. The weekend will be fantastic as I have Saturday off and will be visiting both The De young and Legion of Honor museums to see the temporary exhibits.

This is a sampler that I did over Christmas vacation. It is from Homespun Samplar and is a stamped linen instead of counted cross stitch. 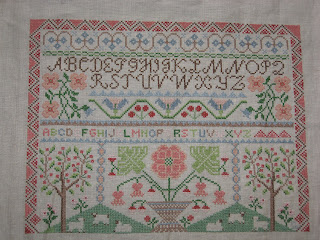 This is the PA Motif Sampler

A hobby of mine that I have picked back up from being away from it for a long time is cross stitching. I have gone just nuts finding all sorts of things out there to stitch and make. I have built up quite a stash over the past few months. Now that I think I have tackled my new camera I think I will try and post some of the things I have worked up.

The first is Quaker Garden, a really nice piece to work up. I used the recommended RR Repro fabric and the WDW floss.

Another piece I really enjoyed making in February was from a Kit by Alyce Schroth, The Pennsylvania Motif Sampler. She designs samplers based on historic pieces and styles from the 18th century. This one is worked on 32/34 Lisbeth natural Linen using the hand dyed silk floss included, 1 over two. It was a real joy to work and the first time I had used silk in a project and I must say that I really enjoyed the silk and the look of the piece.

I have just spent 20 mins trying to move the pic around and have yet figured it out. I will post and then get back.....

So here it is my very first post in my new blog. What to type...... I haven't any pics yet as I am still trying to figure out my new camera, but they are on the way, hopefully. I live here in the city and have for the past 12 or so years moving here from Florida. I stay because of the weather which is right at perfect, IMO. For example Monday was warm, upper 70's, Tuesday sunny and warmer in the low 90's but breezy and today it is back to where it should be 60's windy and fog a rolling in over twin peaks!! So the hot may come but only last few days and then go away, unlike Daytona where the heat settles in for months on end of bright hot sunny weather. Well all for now and I'll keep babbling here in the future.

edgar
Posted by Edgar at 2:12 PM No comments: